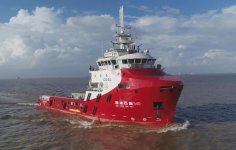 Built in compliance to China Classification Society (CCS) rules, Haiyang Shiyou 540 (“Offshore Oil 540”) is the first in a series of eight specialised vessels that are powered by LNG in line with COSL’s aim of reducing the carbon emissions of its fleet.

Haiyang Shiyou 540 has an LOA of 65 metres, a beam of 15.2 metres, a moulded depth of 6.6 metres, a summer load line draught of 5.5 metres, and a deadweight of 1,500 tonnes. LNG will be used as the main fuel for the vessel’s dual-fuel engines to reduce NOx emissions by as much as 90 per cent and thus ensure compliance with IMO Tier III standards. Diesel will serve as the backup fuel in the event that LNG is unavailable.

The engines have a total rated output of 2,982 kW to deliver speeds of up to 14 knots.